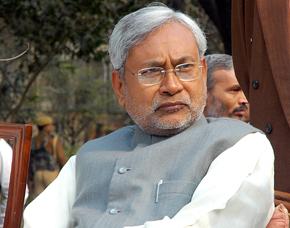 Humara Nayak jeet gaya.
Our hero won. I am not sure about this claim of mine, but I think he won like no one has ever before. I , like millions of other Indians, am ecstatic. I say Indians, and not Biharis, for I truly believe that his Victory is not only hailed by the Indians from Bihar, but from all over India. For a change, the right man won, for the right reasons and at the right time [ Don't misinterpret the use of the word right here ;) ] . For me, it is akin to the Victory of Good over Evil,  like the radiant and resplendent Sun dispelling the clouds of darkness and doom. It is as if our Nayak borrowed Shri Ram’s bow, and chopped off not ten, but multi-headed Raavan’s in Bihar. I see the hand of the Divine Mother, blessing our Nayak with her Shakti, to gore all the Mahishasur’s to death. The Raavan’s are still there, fewer in number though, the Mahishasur’s have not been annihilated to oblivion, but the Battle is on, and you know who is gaining. It feels like Holi, Dusshera and Diwali, all rolled into one. You can say that today, I am on cloud nine, with a rainbow around my shoulders.
One might wonder that what is the big deal about Nitish jee’s re-election. He won in 2005 with a good majority, didn’t he? He worked for the development of the State, didn’t he? Logically speaking, he would have won anyways. And that is where being a Bihari, and having lived in the Dark Ages, gives you the insight that how Logic and Reason had been condemned to hell for 15 years. Unless, you have seen it, heard about it, and experienced it from a close range, you cannot imagine the fear that gripped us all. The perpetual state of disarray that we all lived in, the despair and gloom that had become a part of Life, the notion that one had to leave this damned state for a better Life, and the further you went, the better it was.
When he held the reins in 2005, it was the proverbial sliver lining. But that fear did not go away completely even when he came into Power. Every now and then, the dark thought of his losing in the upcoming elections troubled me. An irrational fear, that nothing good can ever happen in Bihar, that we are doomed forever, that no matter what, the Dark forces will employ diabolical means to usurp power once again. I wonder whether there are others who thought on the same lines, but I had this nagging doubt. It always lurked in my mind, and sent shivers down my spine. Today, his victory has brought with it, the hope and promise for a change that will be lasting and persistent. The landslide is like the proverbial nail in the coffin of the Lords of Misrule. This victory is also a sign of a desperately needed Social change. A change in the mindset of the populace, to rise above caste and religion, to value development and peace over anything else. I do not claim that Biharis are done with caste and religion, or that this change will take place overnight. It a long and arduous process. But with Nitish jee as the Captain, the ship will sail through, and be a shining example of a Nav Bharat.
Our Nayak was not backed by MY or Your people. He was backed by the forward and the backward, by the Hindus and the Muslims, by the hope and trust of the once doomed, who now have a chance to experience Progress for a considerable period.
Today is a great day for India, and for our democratic system. This victory, and the previous one, are in the annals now, and they will be quoted as an example of a turnaround for many years to come. When a state as large and populous as Bihar gets a push in the right direction, it cannot just benefit the people from that state alone. I am no social scientist or a student of economics, but yet, I know and I am so sure of this belief, that the benefits reaped off from the leadership of our Nayak, will affect a lot more people than the 10 crore Biharis.
As Bob Dylan said, the times, they are indeed a changing.
Jai Hind.


p.s. Did any one of you laugh out loud when the Gandhi clan tried hard to impress the Junta, and claim that there has been no development in Bihar, completely ignoring the fact that it was their beloved ally who was responsible for that?

Posted by aShyCarnalKid at 6:27 PM No comments: 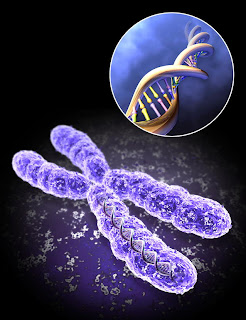 As most you already know, it takes a X and a Y chromosome to be a guy, and 2 X's to be a gal. Now, this Y chromosome has received much more than its share of attention , and its demand has shot so much in our country , that it led to a pre-premature demise of 5 million girls , and though not as many but quite a few mothers as well . There was a time when the Mother was blamed for giving birth to a daughter, people being completely oblivious of the Male's contribution in the form of a Y chromosome . Well, maybe people know a little more than before now, but I bet most of them don't know the following :-
1. The default gender setting for a child is to be a girl. The Y chromosome acts as a trigger to switch the gender. So all MCP's and men-who-think-women-are-inferior, you were all set to be a girl but for the Y .
2. The X chromosome has about 1200 to 1500 genes . Guess how many genes does the Y have ? Only 100 , and the number is going down .
3. The X chromosome encodes the information for about 1200 different proteins . The majority of these protein sequences are involved in brain development and adult brain function . If this does not make you bow before the Mighty X, then what will ? If it were not for your mommy, you would be blithering dithering idiot ! :D
4. Males are a lot more vulnerable to being mental ( for quite a few mental disorders) , as compared to females because while men have only one X , women have a backup . So if you thought being a guy was all fun and games, think again, for there might come a day when you wouldn't be able to think straight . ;)
In my opinion, the above mentioned facts conclusively prove the might of the X . :) And God save the Y chromosome, the poor thing is dropping genes , thanks to some rapid evolution , that it just might disappear one fine day . I bet that would make a lot of women happy . :D
p.s. My source : Brain Rules by Dr. John Medina . A really great read, if you want to know about how does your brain work , and how can you make it more productive and efficient . And anyone with a basic knowledge of Biology can read and understand it .
Posted by aShyCarnalKid at 6:20 PM 21 comments: