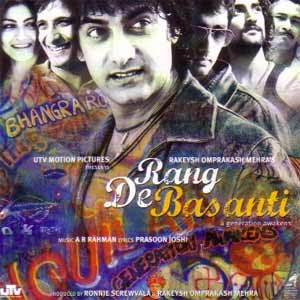 It is one of my favourite movies, and will be so till the day I die. It is amongst the very few motion pictures which brought out my tears, and in no less volume. There was a time when I thought I could cry no more, and then RDB happened. I cried, I cried like a child, and my anguish was real. It was for the loss of one of the greatest sons of , Shaheed Bhagat Singh. He has been my hero since ages, and nobody can take his place that I have in my heart and head for him. For me, he IS the greatest son of this nation. I have decided to call him, hence forth, Mahapurush Bhagat Singh, the son of this nation. Many a times, the mere mention of his name, the heart wrenching reminder that this nation has almost forgotten him, or reading any anecdote about him has been a stimulus to incite my tear glands. In a poll conducted by India Today to list the 60 greatest Indians so far, MBS got an astonishing 27% vote, which was unequivocally the highest. I say astonishing not out of disrespect for him, but rather for my fellow Indians. But I must say, it was a very pleasant surprise. Even though, I still think does remember him well because an opinion poll is subject to thousands, at the best. It is not a referendum. Coming back to RDB, I have read many different reviews of it, it has been lauded, lashed at and laughed at. The message of the movie has been the subject of many a debate, and it has been labeled as misleading and wrong. And that according to me is Grade A BS. What the hell is wrong with the message? And why the hell is it wrong? Ignoring the morality and ethics concerned with killing a human being, what is wrong with taking the life of a politician whose only concern is staying in power, at any cost. Why shouldn’t the scum bags who divide and rule, so obviously be put to death? Why shouldn’t these soulless buggers, who resort to any means necessary to save their sorry asses be executed? And why shouldn’t the blood of these mother effing blood sucking traitors flow in the gutters, when the serving the nation is their last agenda ? We have scores of MP’s and MLA’s with substantial charges against them, and quite a few of them were or rather are hardcore criminals. I bet some of them are even involved with the ISI. Isn’t that just great? I am not saying that all of our netaas are bad, had it been so, we would have completely stopped functioning as a democratic nation long ago. But indubitably, there are many. The goddamned media is also partly responsible for the state of affairs. The fourth estate of a nation should be a neutral and an unbiased observer, acting as a watch-dog. Instead, they seem more like pet dogs to me. What munificent praises do they heap upon the politician whose antics and stand up comedy act has made everyone forget his past record. I bet they get their “pedigree” in reciprocation. A few weeks ago, I saw All the President’s Men, which is based on the true story of how Bob Woodward and Carl Bernstein blew apart the Watergate Scandal, and initiated the downfall of Richard Nixon. The most powerful man of the planet, the leader of the free world was brought down to his knees by two measly investigative reporters of the Washington Post. It’s a modern day David and Goliath story. And people wonder why is a great nation. The war on is no feather in ’s cap, but this certainly is, and it indeed bestows upon it its greatness. In we have our Tarun Tejpals. And if I am not wrong, wasn’t the government planning on passing a bill which would make the evidence gathered by a sting operation inadmissible in a court of justice. Reservation for OBC’s was not enough, there should be reservation for teachers as well. The next time Mr. Arjun Singh falls sick or needs a surgery , I pray to God that a doctor who has benefited from the reservation system should treat him. I foresee a future when there will be no such thing as a general category and merit would be a synonym for your caste or religion. Had Charles Darwin been born in , he would have definitely not come up with the survival of the fittest scheme of nature. He would have been ensnared in red-tapism, bureaucratic BS, caste, religion and language based politics, and would have ultimately shot himself. Our nation faces many threats today, internal and external, and I see no leader who can helm the ship. All I see is gutless and spineless. And I wonder, whether this democracy is doing us good or crippling us ? Isn’t a nation comprising educated individuals supposed to be democratic? I will be damned if say aye to communism, the only way I see out is a Hitler, tailor-made for . A jingoist, who will annihilate her enemies. A dictator who will unleash terror on anything or anyone against . I am willing to surrender my fundamental rights for a man or a woman like this. My rantings and ravings may sound immature to the wise men of the world, but there is an element of logic, a small morsel of substance in it. The only flaw that I find in what I propound is that where do you get the people to do an RDB, to kill in the name of the nation? Would I be able to do it, sacrifice all that I have and can have in the near future? Rang De Basanti indeed, but instead of painting it yellow, make it red.

Force when aggressively applied is "violence" and is, therefore, morally unjustifiable, but when it is used in the furtherance of a legitimate cause, it has its moral justification. The elimination of force at all costs in Utopian. - Bhagat Singh

Posted by aShyCarnalKid at 9:43 AM 5 comments: