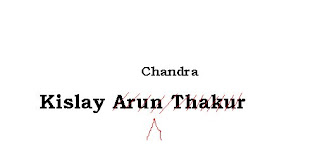 My name is Kislay Chandra. The word Kislay is rarely used as a name, something which I have come to believe through my personal experience. The meaning of this word, Kislay, can be a young shoot, a bud or a new leaf. And the reason why I think it’s a rare name is because , first , when I say it out loud , the person on the receiving end finds it hard to comprehend what I said . And secondly, when his sense of hearing conveys the right message to his brain, it fails to process it as he has never heard of it before. I have not have had the pleasure of meeting a person whose eyes have lit up with knowledge upon hearing my name till date , and I sincerely wish it happens before I depart . My first name has been often misinterpreted, and the different forms it has taken are kiss-ley, kis-liye (which in Hindi means why or for what purpose), kish-lay, , and so on. When I was a child I was often teased by my family that I had been named Kislay because I had kissed a girl when I was a toddler. How I wish that was true. It would have made a wonderful anecdote, and would have been a feather in my cap as well. After I explain my name to my audience, more often than not the person exclaims “Interesting name!” which makes me wonder whether they really mean it or they just said “What a weird name” in their head. When I was introducing myself to my class on the first day of college, my teacher mis-pronounced it as kiss-lay and the class erupted, to my embarrassment .And the best part of it all, having a name like Kislay and a disposition somewhat like a lamb, ended up in me having a nick name like Chummi, which in Hindi means a kiss. Not very hard to deduce, eh? The perpetrator of this crime was my friend who I seriously think did it to pull my leg hard enough to dismember it from my body. It has been an embarrassing four years being addressed as Chummi, as it sounds really really stupid. There was a time when I almost forgot that I had been named Kislay by my parents and being addressed by real name made me think twice before acknowledging. To cut the first part of a long story short, I have started dreading saying out my name.

And now begins the second part of this story. My surname, Chandra, which means moon, and is more of a first name than a surname. It is actually the first name of my grandfather, Chandra Narayana Thakur. And how I, the grandson of C N Thakur and the son of A K Thakur ended up being named K Chandra instead of being K A Thakur is a reflection of the hideousness of one the more prominent evils of Hindu society in a state ridden with almost all of them. Casteism! It was by design that I am not carrying my family name of Thakur, which means Lord. Chucking out the actual family name and substituting it with one which doesn’t give away your caste has become a common practice in my home state. In , you can’t hit a brick without hitting some Kumar, and you come across people having names like Shiv Vikram, Sudhanshu Shekhar, Aditya Alok, etc.And this makes me very sad. It is not that I hate being called Kislay Chandra, but I hate hiding what I am. I was born a Thakur, but as the generations above me gradually pass away, so will my family name. When somebody fails to get a clue about my caste on hearing my name , they ask my father’s and to keep them guessing I drop the Thakur , and say Arun Kumar . It has happened to me a few times. Of course, I have come across few shameless idiots who have hit me with the question enquiring of my caste with such a straight face that I was absolutely dumbfounded. “There are all kinds of idiots in this world”, is what I say to console myself, and after mentally hurling a long string of invectives of the best kind, I let it go. Shakespeare said so – “What's in a name? That which we call a rose, By any other name would smell as sweet.” A person cannot become a great emperor like Ashoka, the Great just by being his namesake. But would Ashoka would have been Ashoka, the Great had he been named Aditya? The whole point of this rigmarole being that why do I have hide what I am. Even that name, which is not a part of me, is a part of me and has shaped me in some unknown fashion to be what I am now. It is a part of my identity and I don’t want it be lost. I wish I was consulted before I was named.

Posted by aShyCarnalKid at 5:04 AM 31 comments: