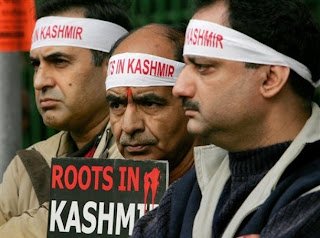 India is a secular and democratic nation. At least that is what the founding fathers wanted it to be. Somewhere down the line, religion became too big an issue for it to be as secular as it should have been. But what the hell, we still are. It is a good thing, certainly something to be proud of. And I am .But then, every now and then, the secular image takes a beating, and a bad one. The history of India is checkered with incidents of riots sparked off for reasons, from mundane to macabre. I cannot quote statistics to back me up on this, but I guess it is the minorities who are usually at the receiving end, more so than the majority. I feel sorry for them. Genuinely. For I do not think that the systematic rape of a woman of the minority community, commencing with the invocation of Mahadev, does service to my religion. I was aghast when I learnt about Abhinav Bharat. I still do not see any rhyme or reason in their actions. If they plan to blow up the terror camps in Pakistan, Afghanistan, Bangladesh or in India (if there are any), I am all for it. But I do not think bombing Muslim-populated areas would serve any true purpose, other than creating more soldiers for Jihad. What happened in Gujarat was atrocious indeed. I concur. I am not denying that it happened, and on a gruesome scale too. And now comes my bone of contention with the media, the liberals, the intellectuals, the human rights activists and the champions of secularism and democracy.

What greater hypocrisy can there be when anything even remotely associated with oppression of minorities by the Hindu masses makes news, but the Kashmiri Pundits, who have been actually deracinated, and killed by thousands, doesn’t nowadays . Does the sole responsibility of the media and the human rights activists is to act as a watch dog for the minorities alone? Does being in the majority automatically warrants of not being at the receiving end? Kashmiri Pandits, who ethnically, culturally and religiously as well, belong to Kashmir, are living like refugees in their own country. They are rotting in the refugee camps. Quite a few of them died of sun stroke as they were so accustomed to the cold climate of Kashmir that they could bear the heat of northern plains. But all this is too old and too stale, devoid of sensationalism and not TRP-worthy. Maybe it is because of the fact that the number of pundit votes generated won’t be enough to quench the thirst of the blood-thirsty bastards scavenging for votes, that they do not make an issue out of it. If only the pundits could have thrown family planning to the wind and produced at least a dozen kids per family!

“Those to whom evil is done do evil in return”, as said W H Auden. But how many of the Pandits took to terrorism in retaliation? As if this was not bad enough, the UN decided to give some crappy human rights award to Benazir Bhutto. What definition of human is the UN following these days? How does the Bhutto bitch get an award when she so clearly instigated the “ethnic-cleansing” of Kashmiris?

There is so much hue and cry over Kashmir. And how can I forget the recent Amarnath land row? Fuck the Kashmir issue. Kashmir be damned. I don’t give a rat’s ass whether we Indians ever get the land known as PoK back. If it were up to me, I would call truce and settle for the LoC as the International Border. But I do care about the Kashmiri Pandits. Because theirs is a truly lost cause. For a culture as old as the concept of Bharata Varsha and Sanatan Dharma, for my fellow Indians who are as integral a part of this nation and its culture as anyone can ever be, for them my heart weeps. Shame on us. They have been sidelined because they are not in numbers large enough to be on the election manifesto. They do not have enough representation on any level .I guess even the Hail-Hindutva-Hardliners have forgotten them. While they are bellowing over Ayodhya and Ram-Sethu Sundaram, why don’t they holler about the Pandits, and the other religious minorities, who have been the brunt of unbridled and systematic violence, the body of which is Pakistan and the ideological source, Islam. Oops! I said the unmentionable. My true colours are out. I am a venom-spewing, minority bashing, jingoistic, right winger! As if I give a damn.

The p-sec’s (thank you Krishna Aradhi, it is an awesome term), who usually are hoarse from crying out murder and foul, even when a brave man legitimately loses his life battling terrorists, why don’t you shed your tears for these poor souls as well ? On a side-note, I often wonder, whether those who suspect the authenticity of the encounter in which Mr. M C Sharma was martyred really think that we all have been hoodwinked, and in actuality, Mr. Sharma is alive, and somewhere in the Bahamas? I mean WTF! A man lost his life, how can that be fake ? Coming back to the p-sec’s , what do the mother-effing pseudo-secularist liberal assholes have to say ? What do the Teesta Setalvad’s and the Arundhati Roys have to say ? Where were the liberals,intellectuals,leaders,human right activists when there was an actual “ethnic” cleansing taking place ? I don’t think they will ever take a stand on this issue, because vociferating for the rights of an ethnically and religiously Hindu group would automatically make a right-winger out of them.

What happened to Kashmiri’s is now happening to the Bodo’s in Assam. They face a similar threat, and if the Bangladeshi plan pan’s out, we will have another Kashmir at our hand . But even that is not good enough. Because a) they are from the north-east , which is not deemed worthy of attention , b) they are Hindus practicing Brahma Dharma and c) Some jackasses want to bestow Indian citizenship upon the illegal immigrants to get some more votes. Why don’t these morons whore out their own mother’s and daughter’s instead? A more direct approach to grab votes. And it will work. Once again, no self respecting “truly” secular liberal would touch their issue with a ten foot pole. Alas, only saffronized to the hilt right-wingers can sympathize with their cause .

I am a Hindu, a proud one, and I leave no occasion to say it out loud. I am not proud of the fact that of lately, certain Hindu organizations , for the right or wrong reasons, have instigated violence against minorities. I am not proud of casteism, dowry system and a host of other crap like that, which is a part of it. But that is not the extent of Hinduism. That’s the flawed part. I am a proud Hindu because of its rich philosophy. Because it says “Sarva Dharma Sambhava” and “Vasudev Kutumbam” . There so many different schools of thought, from theistic, agnostic to even atheistic. I am proud of it because there has been no major Hindu evangelical movement, which indirectly lends weight to the Hindu principle of “Sarva Dharma Sambhava” . And I will never be ashamed of it. And a thousand curses and eternal damnation to those who try to belittle my culture and faith without even attempting to understand it.

I guess self-flagellation is a incredibly satisfying vocation. If I ever get a chance to go abroad, and hold an audience, I would make sure that I tell them what a hell hole India is , and how many atrocities are committed by the intolerant and chauvinistic Hindus on a daily basis . Boy oh boy, wouldn’t that win me a whole lot of brownie points !I would be the toast of the civilized society, if things worked out for me.

All I want to hear is a spade, being called a spade . I shall never ever proclaim what happened in Gujarat to be even remotely right or justified. But why did it happen ? Did the train burning incident was conjured up or state-sponsored as well. Why does being Hindu in India is not good enough for the English media and the liberals and secularists. BD made news, for the wrong reasons. It was right. They did something unimaginably evil. They raped a nun. But what about the bloody New Life Activists who had painted an extremely biased, inaccurate and evil picture of Hinduism through their pamphlets. Why don’t they face the heat? I know of quite a few politicians and social activists who are champions of secularism and defenders of minority rights. Are there any Muslim activists for Kashmiri pundits or Bodo’s ? This is a cheap shot, but what the hell, I am a right-winger now, aren’t I ? I would just like to know. I am not implying that there cannot be . Anyone know a name or two, do tell me . The same goes for conversions and shit. Are there any voices of reason who have come out openly against the destructive proselytizing, the one achieved through nefarious means.

I do not believe in chauvinism, linguistic parochialism, communalism, fundamentalism, communism and most of the other –isms. The one –ism I truly believe in is Indian-ism. Religion is secondary. But will I stay truly Indian, or will the farce going one in the name of God and Votes derail me , and leave me as a hollow Hindu, incensed and retributive ? I do not wish to say anything about what happened in Mumbai (26th November 2008). Enough has already been said and nothing has been done. But I would like to know if the red sacred thread worn around one’s wrist by Hindus is proof enough to elicit a response from a renowned journalist and TV-anchor, Rajdeep Sardesai, that they could be “Hindu” terrorists ? Was his train of thought anywhere close to the track ?

I often contemplate on the concept of secularism from an Indian perspective. And I realized this . There are those who are secular to such extreme lengths , that to garner votes/gain popularity among the liberals or to appease their altruistic cravings, will go to any length to appease the minorities. And then, there are the ones who would like dump them in the sea, or something equally horrible . And those are the only two kind who are heard or seen. I guess being neither here or there isn’t good enough to get heard. Isn’t a secular nation supposed to ensure that the rights of all different kinds are protected, but at the same time they are on the same footing . But not here, it’s either, “I will let you climb on my head, and piss” or “I will piss on you “ . And that pisses me off .

There are times when I wonder, whose side do I take, which path do I tread on? But there is none for me, no middle way as Buddha said. I am pro-India, but so are the right-wingers and left-wingers and the secularists, as they claim. They all have their own axes to grind, while the nation gets ground effectually. Meanwhile, all I wonder is, who cries for those are Hindu, and yet have suffered.

A documentary on Kashmiri Pandits
Posted by aShyCarnalKid at 7:00 AM 102 comments: