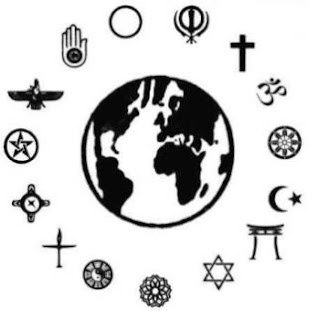 There are many meanings of this word, but the one I am referring to is this: Willingness to recognize and respect the beliefs or practices of others. I sincerely feel that people do not have enough tolerance for religions other than their own. And some of them have them none. Zero, zilch, and they also go to the extent of blasting away that faith or faith’s in question. And this seriously bothers me. As a Hindu and living in India , where we have a Hindu majority , I don’t think I have directly come across or experienced any hostility due to lack of tolerance , but of lately , as an active member of a couple of communities on Orkut , I finally faced this hideous monster . It is so ugly. I am a Hindu, a practicing one, if there is such an animal and a proud one. But never ever in my life has this thought crossed in my mind that Hinduism or Sanatana Dharma (which is the correct expression) is the best religion of all or the only path to a place in Heaven, salvation or whatever you are seeking. I cannot believe that Hinduism is the only way to lead a healthy and fulfilling life. Although I am partial to Hindu philosophy, I do not look down upon the other schools of thought. I have been taught that all the different religions are different ways to the one and only God (the credit goes to my dear Grandfather). And I sincerely believe that. Ramakrishna Paramhansa practiced different religions and ultimately realized that the various religions are different ways to reach The Absolute, and that the Ultimate Reality could never be expressed in human terms. Is it that hard to believe someone as great as him? Forget him; there are billions who haven’t even heard of him. What about my own logical and analytical capabilities, what do they say? That we have different religions so that we can fight amongst each other, and will therefore never get bored. Or that there are different religions because the world is not same everywhere. The Middle-east is one big desert, Siberia is covered in ice, and has jungles darker than night and so on. If there is diversity in nature and in our own species, why can’t it be present in the way we worship Him? I believe the way different religions teach you to lead you life has a lot to do with the geography of the ground zero, i.e. the place of its origin. It is seriously disturbing that people put no thought before debasing a faith other than their own. Even if I do find something weird, nonsensical, stupid or plain evil about some faith, I would rather keep my mouth shut than open it, because I might hurt someone. I can’t expect everyone to be objective and scientific in their approach, and learn to call a spade a spade. I am hurt when I am labeled as heathen, a pagan or a kaafir, just because I follow a different religion. For me Ishwar, Allah, Waheguru and Jehovah are all synonyms of the one God. And this was regarding all those who believe in a God. About those who didn’t. The Atheists. I have nothing against them either. If you don’t want to believe in the Almighty, you are most welcome not to. I don’t want you to just because I do. It would be an imbecilic act to force someone to do so. Diversity comes into play again. People who believe in God and call him by different names and people who don’t. And of course, there are also the ones who have put a question mark at the end, the Agnostics. About these Atheists. I have come across innumerable posts on Orkut in which people have so mercilessly, so blatantly and so brutally ripped away the teachings of a faith. Ripping them away, shredding them into pieces, thoughtlessly. They make fun of and heap insults at everything that religion has to say, and the usually the religion they inherited through birth is the one which suffers at their hands the most. I have come across posts in which these Hindu born morons have spewed nothing less than poison and I was utterly disgusted and devastated by it .What I want to ask them is , did they try and find out why Krishna had 16000 wives before labeling Him as a sex maniac . I mean, literally, for God’s sake, what answer did they get? Krishna saved those women from the harem of Jarasandha , and he was married to them , but the relationship was platonic . It is called bhakti yoga. I have my doubts and questions. But I try and keep an open mind, be as objective as possible. If I have a preconceived notion about something, I will never be able learn something new. Why oh why do they have to do that? This world has become a really difficult place to live in, all because of the lack of tolerance. And I was talking about religion; it’s not just limited to religion. Language, culture and race are also affected. It boils down to this; a man is not tolerant of another one who is different, to a degree more than what is acceptable to him. A language may sound gibberish because of the lack of its knowledge. It may sound sweeter to you than your own once you learn it. I hope my fellow man is tolerant of me, if only out of politeness than respect for me as a fellow human wherever I go.

“The problem to be faced is: how to combine loyalty to one's own tradition with reverence for different traditions.”

“Collective fear stimulates herd instinct, and tends to produce ferocity toward those who are not regarded as members of the herd.”

“The price of the democratic way of life is a growing appreciation of people's differences, not merely as tolerable, but as the essence of a rich and rewarding human experience.”


“It is the duty of every cultured man or woman to read sympathetically the scriptures of the world. If we are to respect others' religions as we would have them respect our own, a friendly study of the world's religions is a sacred duty.”

“I used to think anyone doing anything weird was weird. Now I know that it is the people that call others weird that are weird.”

“Human diversity makes tolerance more than a virtue; it makes it a requirement for survival.”

“What is tolerance? -- It is the consequence of humanity. We are all formed of frailty and error; let us pardon reciprocally each other's folly -- that is the first law of nature.”

http://www.wisdomquotes.com/cat_tolerance.html - Source of the above Quotes

Posted by aShyCarnalKid at 2:34 AM 9 comments: